Prince Charles married Princess Diana despite being in love with Camilla, triggering decades of resentment, anger and heartbreak brought to life in The Crown. Season...
Read more 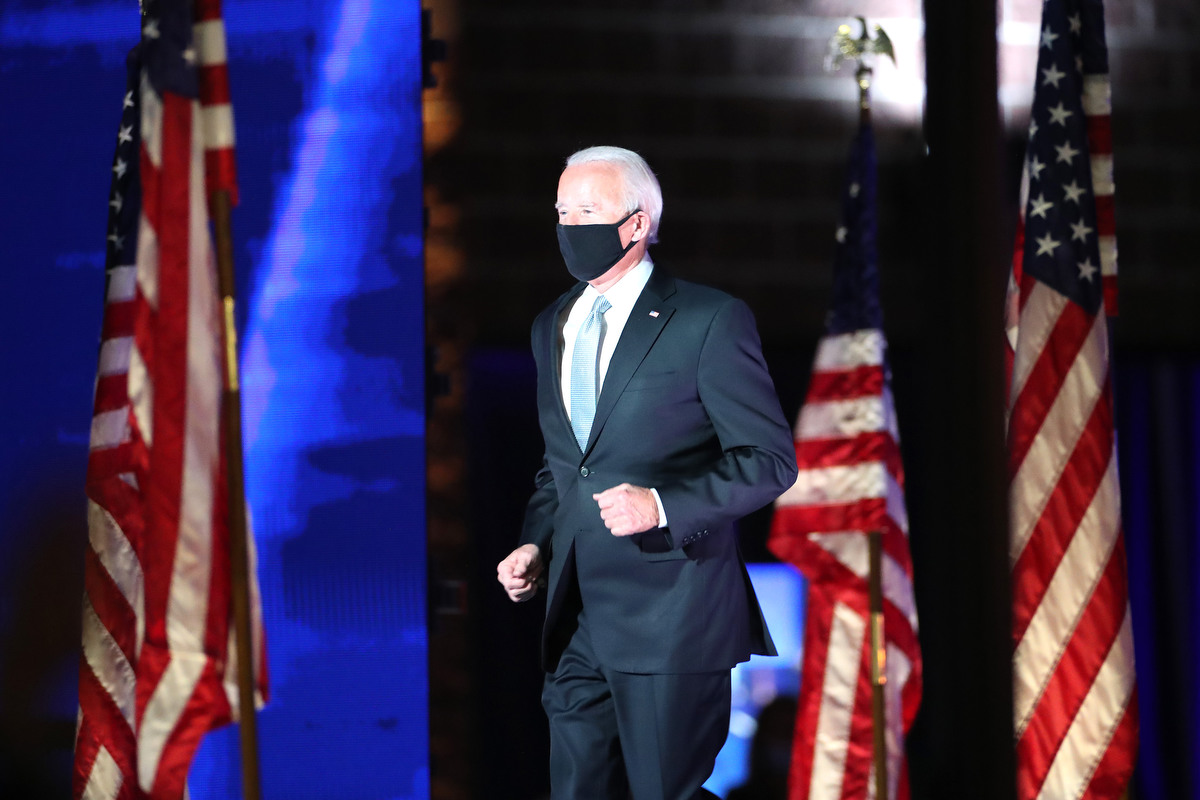 The U.S. will soon be firmly back on the global health stage, but it may not be top dog anymore.

While U.S. President Donald Trump announced plans to withdraw from the World Health Organization; undermined his administration’s top infectious disease expert and alienated himself from world leaders, other countries stepped in. European nations in particular have been able to carve out valuable roles for themselves in the global health space.

U.S. President-elect Joe Biden has pledged to rescind his country’s planned withdrawal from the WHO on his first day in office, but his predecessor has left him a vastly changed political space.

“In political science, we say, when there’s a void someone moves in,” said Ilona Kickbusch, an external WHO adviser and founder of the Global Health Centre at the Graduate Institute of Geneva. In this case, the EU, under Germany’s leadership, has moved in, she said.

“I don’t think, given their geopolitical statements and the enormous political and financial investment they have made now, they’re going to move to one side and say, ‘Oh, wonderful. We’re going to let you be the hegemon again,’” said Kickbusch.

Countries such as Germany have worked to fill the financial and political gap expected to be left by the U.S.’s planned withdrawal from the WHO. In June, Germany pledged an extra €200 million to the organization, bringing its total contribution to around €500 million — an amount exceeded in the last two years by only the U.S. It’s also currently the top donor to the WHO’s already distributed voluntary contributions for 2020-21.

In September, the U.K. said it would increase it’s funding to the WHO by 30 percent to £340 million over the next four years, helping to cement its role as one of the WHO’s top funders.

European countries, and the EU itself, have also put down significant cash for the global mechanism that is working to ensure equitable access to coronavirus vaccines, treatments and tests. On November 12, the EU announced an additional €100 million to COVAX, the vaccines pillar of the mechanism, bringing the EU’s total contribution to €500 million. Trump meanwhile, has refused to join COVAX and Biden’s team is expected to hold talks with the alliance.

Canada and even some middle-income countries are also becoming equally important in terms of leadership and financing, said Clare Wenham, assistant professor of global health policy at the London School of Economics. “It’s not the same playing field as it was in 2016,” she said.

Europe’s increased funding commitments have come with a proviso — that the WHO shake things up. Under the German Presidency of the EU, Germany and France spearheaded efforts calling for a reform of the WHO, and it was their proposal that ultimately led to the EU’s conclusions on how to strengthen the organization. The EU wants the WHO’s role and capacity to be strengthened and a revision of the alert system for the declaration of a Public Health Emergency of International Concern. It also asked for increased transparency on national compliance with the international health regultions.

The U.S. has its own proposal but it has received significantly less coverage.

The U.S. hasn’t disappeared from global health. It has continued to play a vital role, with many staff at the WHO on secondments from the U.S. The three committees established to variously investigate the global response to COVID-19; the international health regulations and the origins of the virus, also all include American nationals.

But Trump’s rejection of the WHO has left the U.S. with some catching up to do, said Susan Bergner, researcher in global health at the German Institute for International and Security Affairs.

“The U.S. fell behind and this whole process of catch up, domestically and internationally, will also slow down their capability to actually act as a global health leader.”

Biden has made clear his commitment to global health and the WHO, tweeting in July: “Americans are safer when America is engaged in strengthening global health. On my first day as President, I will rejoin the @WHO and restore our leadership on the world stage.”

His campaign website states that he will call for “fully resourcing the WHO, especially its Contingency Fund for Emergencies.” But in the four years that Biden has been out of the White House, much work on global health has been undone.

It’s not just the WHO that Trump turned his back on. Under his presidency, and like many Republican presidents before him, he implemented and expanded the Mexico City Policy, or the so-called global gag rule, effectively banning U.S. global health funding for organizations that have any involvement in abortion services.

It’s expected that Biden will repeal the policy once he is in office — a move welcomed by many working in global health.

“The last four years have been devastating for women and girls around the world because of this policy,” said Naisola Likimani, who leads the team at SheDecides, the organization created in response to Trump’s implementation of the Mexico City Policy. “And so, [even while] we are excited about the policy being repealed, we do know that it’s going to take some time to undo the damage that it has done.”

The past four years of the policy have also indicated the limits of the rest of the world’s commitment to plugging the financial gaps left by the U.S.

“There was no way that any government or other governmental foundations could even fill that gap,” said Likimani. SheDecides raised significant funding — over one year it had raised around €450 million. “But that is truly a drop in the ocean compared to the amount of global health assistance from the U.S.,” she said.

The financing of global health will be one of Biden’s first challenges, said Kickbusch. First up will be the nearly $100 million arrears that the U.S. owes for its assessed contributions to the WHO. Kickbusch said that it isn’t clear how Biden will address this, nor how he will go about future funding of the WHO.

Whatever the scale of the return of the U.S.’s funding to the WHO, it will likely not be enough.

During the World Health Assembly, German Health Minister Jens Spahn, speaking on behalf of the EU, said that building up the WHO will only be possible if its 194 members take on more financial responsibility.

Germany’s own Björn Kümmel, deputy head of global health division in Germany’s health ministry, also told the assembly that there is a “major discrepancy” between what member states expect the WHO to do and what it can actually do given the financing challenge.

A Biden presidency could pave the way for strengthened relations between the EU and the U.S., with global health issues set to continue to dominate the headlines for months to come. “I think there are a lot of opportunities for the U.S. to actually be a partner for the EU again,” said Bergner.

But this could also result in a sidelining of so-called middle powers — something that Kickbusch is wary of. “What we don’t want is a leadership model of the West, [where the] EU and the US come together in cahoots and leave the Global South out.”

So far, it seems that European countries have learnt the hard way about what happens when countries act according to national priorities. Export bans on PPE and border closures have given way to expanding the EU’s powers on health.

The reality of Trump’s presidency has also been a wake-up call for those in global health. “It’s been a disruption that actually has really made people realize, ‘We can’t take this system for granted,’” said Kickbusch.

But Trump isn’t the only world leader disenchanted with the WHO. Brazilian President Jair Bolsonaro has said he will consider pulling out of the WHO after the pandemic. Indeed, Wenham said she “wouldn’t be surprised” if other populist leaders were having similar conversations.

What’s needed is a diversification of the power distribution in global health, said Bergner. “What the Trump episode has shown us is that we can’t rely on a few key players that have concentrated the power in global health,” she said.

The cases emerged while election workers continued counting thousands of ballots. As a hand tally of the presidential race began in Georgia, the state’s...
Read more
Politics

“We cannot successfully restart our economy until workers are safe — and the first step is to require that businesses implement very basic measures...
Read more

Prince Charles married Princess Diana despite being in love with Camilla, triggering decades of resentment, anger and heartbreak brought to life in The Crown. Season...
Read more
News

‘We could have a normal winter next year’

One of the scientists behind the coronavirus vaccine that has been found to be 90 percent effective said that "if everything continues to go...
Read more
Politics

A huge Norway spruce arrived Saturday at New York City's Rockefeller Center to serve as one of the world's most famous Christmas trees. (Nov....
Read more
NEWSM8News From Around The Globe

Princess Diana said her bulimia was blamed for the break up of her marriage rather than her husband's affair in heartbreaking tape recordings. The princess...
Read more